Speaking of the Internet of Things

When I first started engaging the topic of the “Internet of Things” I realized I needed a mental model for talking about its pieces and parts. In order to develop this model I asked myself the first and likely the most obvious question, “What is a ‘Thing’?”. This, of course, begs the most obvious second question, “What isn’t a ‘Thing’?”. So that I could at least be consistent in how I talked about this space I created the following sketch. 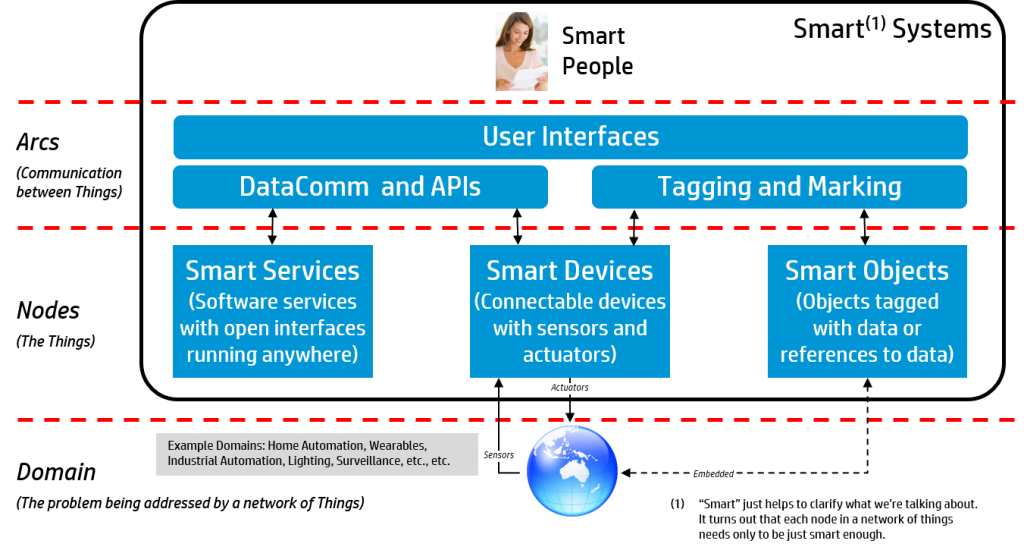 Conceptual framework for discussing the pieces and parts of a network of things.

I divide things into three (actually four) categories; Smart Services, Smart Devices, Smart Objects and Smart People. The last category came from a recent showcase at Oregon State University where a couple of of the presenters insisted that we should not forget that people are often a key part of an IoT system. Not all of these categories need to be represented in any particular network but its rare to see a network that doesn’t at least include either smart services or smart devices. Note that the qualifier “Smart” is only used to mean “able to participate in a network of things”. There’s no requirement that any node in a system be any smarter than it needs to be in order to manage its state (if its state can change) and to communicate with other nodes.

Here is a collection of slightly more detailed descriptions of each of these categories:

This mental model has helped me to communicate and think about various notions related to the Internet of Things, but it has its limitations. It focuses primarily on the pieces and parts of a network of things and does not address other interesting aspects such as the various applications and behaviors of networks of things. Your milage may vary. If you have a different and better model then I’d love to hear about. I suspect that if we discussed it we’d come up with a new model that’s even better than either of ours. In the meantime this one is working for me. If it works for you then feel free to adopt it, but I’d appreciate it if you’d let people know where it came from.